The Fire or The End of an Era

Here's an article as it appeared in the Hutchinson News. The event occurred on 12 May.

Fire Damages Portions of Pretty Prairie Couple's Home
Leon and Linda Hendrixson returned home from the bank and the hardware store Monday to discover their house on fire.
"I didn't even go inside," Linda Hendrixson said. "I knew it was on fire before I got to the door."
She smelled smoke and heard "popping noises" coming from their home at 14413 S. Whiteside Road, located south of Arlington Road in Reno County, Linda said.
Leon Hendrixson turned the gas off and the couple went to a neighbor's house to call authorities.
Then, surrounded by family and friends, they watched from afar as about a dozen firefighters from Pretty Prairie and Reno County fire departments worked to put out the blaze.
Fire officials told the Hendrixsons the kitchen and back portion of their home - where they have lived since 1962 - were a total loss.
Officials are still investigating the cause of the 9:30 a.m. fire but think it started on the back porch, said Pretty Prairie Fire Chief Rick Graber.
"There is a gas heater there they had run a little this morning," he speculated. Linda Hendrixson lamented the loss of her kitchen, which had been completely remodeled last summer, and wondered whether their new beds, antiques and her sewing machine could be salvaged.
The couple does have insurance, but it "will never be enough," she said as she watched firefighters spray down the scorched wood.
She'd been looking forward to a visit from her son, Alan, a teacher living in Lithuania who was set to return home in July with his wife and children.
For now, the couple will stay with family living near Yoder and wait to assess the damage.
Graber said there was no burn damage to the rest of the house, but there was heat and smoke damage.
He said officials have not yet calculated the total loss. "Everybody got out, and nobody was hurt," he said. "There was a lot of damage, but they might be able to save a lot, too."
Well, for any who don't know, the article is talking about my parents' house, the house where I grew up. The fire took place almost exactly two weeks before my father's 87th birthday, which was on May 25. The house was declared a total loss by the insurance company.
I can't imagine what my parents felt as they watched their house go up in flames. At least some family mambers were there to comfort them. And from what I've heard, the response of the community has been nothing less than amazing, which must also help keep their spirits up. Still, losing one's house, I can only imagine, must be terribly traumatic, especially for people who are 86 and 82. On a slightly brighter side, many antiques and family mementos were salvaged.
I knew that old house wouldn't always be around, but hearing that I wouldn't get to spend my summer there on the farm (my family will travel from Lithuania to Kansas to spend most of this summer with my parents) was painful. It seems that my parents will now move to the nearby town of Pretty Prairie. I hope they are able to make the adjustment of moving from a rural setting. I know my dad will miss being able to go out to his shop and putter around.
I had planned to publish this earlier, but I was hoping that I would receive some photos. None have arrived, but I can nevertheless add a couple of photos of how the place looked. These were taken during a visit about five years ago. 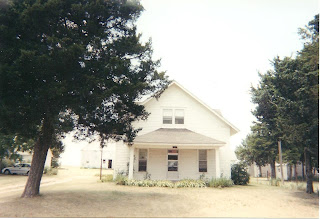 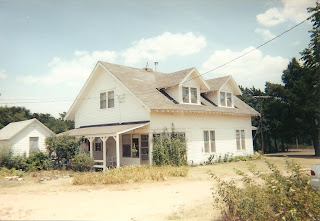 Posted by Alan Hendrixson at 06:37

Other Blogs about Lithuania or Lithuanians

A Mixed Bag of Sites I Visit from Time to Time