Another addition to the Lithuanian Drivers' Hall of Shame:

Uh, if you can't find a parking space, buddy, no, it isn't OK to park in the middle of the driveway and block other drivers. File this under the common Lithuanian ailment of "I can do whatever the heck I want to do and if what I do affects you in an adverse way, that's your problem, not mine".

And something to lift the spirits: Morcheeba.

Rome Wasn't Built in a Day

One of my favorite songs and videos of all time: Up with People by Lambchop.

Posted by Alan Hendrixson at 08:57 No comments: Links to this post

This article comes from here: http://www.delfi.lt/news/daily/lithuania/article.php?id=17113068. I'm only going to translate the first half of the article.

Great Deportation of 1948 Marked in Lithuania

It has been 60 years since 22 May 1948, the day the Soviet Union began the operation called Vesna. It was the most massive deportation of Lithuanian people in the history of the country. Forty thousand people [11,000 of which were children] were deported from Lithuania. This deportation is remarkable not only for its size, but also because it took place only in Lithuania, Lithuanian Radio reports. Deportations on a massive scale did not affect the other two Baltic States that year. In the entire Soviet Union, about 80,000 people, half of them Lithuanians, were forced to move in 1948.

The largest portion of the deportees at that time were wealthy farmers, who had been called the enemies of collectivization. Historian Arvydas Anusauskas says that the goal of the mass deportation was to crush armed resistance and the boycott of social, economic and agricultural reforms. Other aims were to frighten the remaining population and to furnish laborers for the far eastern and northern parts of the Soviet Union.

The 60-year old plans and maps of the deportation are still stored in top secret archives in Moscow. The first mass deportation took place in Lithuania in 1941.

Events to mark the 60th anniversary of this event are being held in Vilnius and Kaunas.

Click here if you'd like to hear a little about the life of a Lithuanian student in the UK. He has some interesting things to say. Some of the things he talks about are stereotypes (and then he goes on to stereotype British students), Lithuanian education vs. British education, and immigrants in the UK. I found this at Lithuanian Jotter.
Posted by Alan Hendrixson at 08:27 No comments: Links to this post

Some more music from Scandinavia.

This first video is FC Kahuna (from the UK) but the vocalist is Hafdis Huld, who is from Iceland.

The other videos are of songs that come from Hafdis Huld's 2006 album, Dirty Paper Cup:

http://www.youtube.com/watch?v=kUd1XqwyI5o
The dancer in this video, who is an Icelandic actor, looks exactly like one of my former co-workers. The resemblance is really uncanny.
Posted by Alan Hendrixson at 10:46 No comments: Links to this post

Read this article about Obama and his flag pin and you'll see why the people in the U.S.A. elect "presidents" like Dubya. I saw the headline and was all like "whuuut?". Maybe I've been away from the States for too long, but I have a couple of questions:
Since when did such information become important, and since when does a flag pin and not a person's deeds tell us anything about his/her patriotism???

Reading stories like that, I no longer wonder why the good ol' U.S. of A. is going down the crapper...
Posted by Alan Hendrixson at 01:52 No comments: Links to this post

Since my last post was about fanaticism, I decided that this article would be a good follow-up. Actually that link is for another blog that talks about the article and provides a link to it.

The war on drugs? Ah, yes, the dangers of putting fanatics in charge of something that's doing absolutely no good in the first place. Education? Rehab programs? Providing people with other activities? Nah, too complicated. Much easier to simply throw people in prison.

One reason I wanted to provide the link to Boing Boing is that you can then also read the comments there. In particular, one person provides a link (see May 12 11:42 p.m. post) to Bill Hicks describing the war on drugs. Must be seen. You would do well to view the one about mushrooms as well (can be found in related videos). Explains exactly why the government doesn't want people to use shrooms. He hit the nail on the head. Fantastic.
Posted by Alan Hendrixson at 09:43 No comments: Links to this post

First of all, you need to read this article.

For Abdel-Qader Ali there is only one regret: that he did not kill his daughter at birth. 'If I had realised then what she would become, I would have killed her the instant her mother delivered her,' he said with no trace of remorse.
Two weeks after The Observer revealed the shocking story of Rand Abdel-Qader, 17, murdered because of her infatuation with a British soldier in Basra, southern Iraq, her father is defiant. Sitting in the front garden of his well-kept home in the city's Al-Fursi district, he remains a free man, despite having stamped on, suffocated and then stabbed his student daughter to death.

I'm tempted to leave it at that, let everyone come to his/her own conclusions. I personally thought about the dangers of fanaticism, whether Islam is a religion that somehow encourages fanaticism, whether the problem is all organized religion, that George W. Bush must shoulder some of the blame (I like to blame him for just about everything evil these days), from where such hate and intolerance arises, etc. Too many questions, few clear answers, and maybe no solutions.
Posted by Alan Hendrixson at 23:03 No comments: Links to this post

I was wondering about what to write about. Maybe means I shouldn't bother writing, but darn it, I wouldn't want to let the two or three people who read my blog on a regular basis down.


Yesterday I found this article on Delfi.lt: http://www.delfi.lt/news/daily/crime/article.php?id=16921302. I won't bother translating anything but the first paragraph, which contains the main idea, anyway.

Lithuania Number One in EU in Terms of Death of Children on Roads
Statistics show that it is not safe for children to go to school and back. Last year there were 1453 traffic accidents in which children were injured. Seventy of those children died. In the first three months of this year, there were 218 traffic accidents in which children were injured. Most of the people responible for these accidents were either driving carelessly or drunk.
Another number one for Lithuania--as if total number of deaths on the road and suicide weren't enough. Ah, what is it about this place? I drove up to the northeast of the country this past weekend; still surprised at the number of people speeding, expecially with the TV and radio flooded with ads about the dangers of speeding. I was driving the speed limit and was passed by dozens of cars on my way there and back.
But I think I've made my point about that already. Maybe the best thing I can do now is continue with my "Hall of Shame" for Lithuanian drivers. I heard or read a few days ago that the police were going to start printing lists of people who had been caught driving while intoxicated--and possibly those caught for other serious traffic offenses(?). But what about those who don't get caught? That can be my contribution.
While reading the article I mentioned above, I saw an ad for this car. 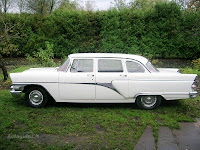 A beaut, eh? The ad can be found here. Not so sure about the 61,000 euro(!) price tag or the hot pink upholstery, though.
Posted by Alan Hendrixson at 06:39 No comments: Links to this post

The past few days I've spent all my free time (and not-so-free time--annoyed wife, check; neglected children, check) reading Cambodian Skies Journal. The beginning of the story can be found here. I've found it really engrossing. It truly provides a lot of food for thought.

A description taken from the blog:

Cambodian Skies is a journal like no other that you will read. It shares the journeys, both physical and spiritual, of Pete Calanni, a self-proclaimed ex-hippie from western New York. Cambodian Skies details his travels, the people he meets, his goals, thoughts, fears, ups, and downs. Very real stuff, no glossy fiction here.

One of my favorite performers:

I'll always remember the first time I saw the The Deer Hunter.
Posted by Alan Hendrixson at 02:21 No comments: Links to this post

Other Blogs about Lithuania or Lithuanians

A Mixed Bag of Sites I Visit from Time to Time